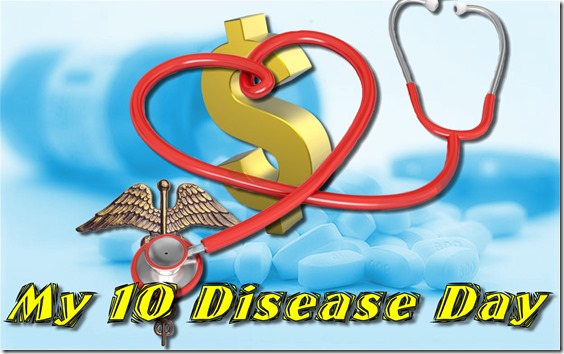 It was a day just like any other – until I turned on my television set.

I had just finished eating dinner: a delicious meal of roast chicken with mashed potatoes and vegetables, when a man on the news announced that 97% of the chickens sold in American supermarkets contained salmonella.  That didn’t sit too good with me, nor did my dinner.

You would think that I had the common sense to turn off my set at that point – but no.  I kept watching to see what they would next inform me.  Things got worse.  The commercials came on.

I didn’t realize how bad a shape I was in – until they told me.

In nice, precise 30-second intervals of fast-talking people and loud music, I found out that my skin was probably too dry, my hair most likely all wrong, and I most assuredly had joint problems and acid reflux disease (in the off chance that I had eaten one of the good chickens from the 3% group).

I grabbed a pad and a pen and started making a list of all my flaws, problems, shortcomings and diseases, all dictated to me by the wonderful manufacturers of the products that would cure them. The ads continued, and nice ladies and kind gentlemen informed me that I was most likely quite ill, and that I needed to get to a doctor right away.

How wonderful that so many people are concerned about my well being, I thought.

The Kindness of Strangers

I continued writing, taking copious notes about the medicines I now needed to cure the diseases that I now had.  And it’s a good thing that I am a good speller, because some of those words are tough.  It’s pretty hard to spell adalamunilabob, flucocuriosuromine, and cordicluophenoproponalimides without a college degree, unless you got really good grades in high school and got side-tracked after that. I began to feel sorry for dropouts until I realized that there was no time left for that.  I had serious health issues that needed addressing.

This must be my lucky day, I thought. Good thing I turned on my TV or else I would never have known how bad I am.

I told myself that I needed to stay strong.  After all, the man said that if I could put up with some minor skin rash, incontinence, projectile vomiting, and malignant melanoma, I should be fine – piece of cake!

The Road to Recovery

So today I spent most of the day making doctor’s appointments to get rid of the 10 diseases that I caught yesterday. It’s a good thing they can see me right away, because after tonight I will probably come down with 10 more, and the number will be mounting.

It’s a wonderful thing that we have television, and that we have so many people put our welfare before everything else, including making money.  Isn’t it?