(Be sure to click on the images or else you will miss all the fun.)

The year 2013 is coming to an end – or so they tell me.  I can’t be sure because I seldom listen to what “they” say. And since just about everybody on the planet is making “recap” lists and handing out awards, why shouldn’t I do it, too?  Well, I could come up with at least 100 reasons, but I didn’t let that stop me. So here is my rundown of the things that bear noting from the year 2013. (Yes, it’s one of those again.  You know the drill by now.)

The history of The Hungadunga Award is a rich one. It was created about 15 minutes ago because I had nothing better to do than to annoy everyone. It was named after a famous scene in the 1930 Marx Brothers’ Movie “Animal Crackers,” in which Zeppo is allowed to be funny. This was the first and last time that ever happened, so I thought it was worthy of noting – plus the name “hungadunga” is fun to say.  If I have any more kids, I am going to name them all Hungadunga and just add numbers after that.

And Away We Go…

Always number one when it comes to eating, America again led the way in 2013. The most posted picture on the Internet was that of food. New on the menu last year was the cronut, the pretzel bun, and the fish stick tree. Above you will see photos of two of the biggest food inventions of 2013: the chocolate cake hamburger and donut earrings.  Can life get any better? A 2013 Hungadunga Award goes to the American food industry and the clever people who market it to us.

Dr. Strangelove, Where are You?

The Cold War heated up again in 2013 fueled in part by a mutual disdain for one another between President Barack “Barry O’Bam” Obama and Russian President Vladimir “Vlad the Paler” Putin.  Above we see the two men pouting over the exchange of gifts at a recent economics summit.  Apparently, President Obama wanted Stoli and President Putin wanted Doritos.  Can missile exchange be far away?

Also stoking the flames of animosity were Edward Snowden (above leftist) who got ticked off because his boss picked up the extension in the other room every time he tried to call his girlfriend on company time, and “Jumps” the Wonder Frog (above right). Snowden decided to get even by putting on his Maxwell Smart outfit and traveling to Moscow with government secrets and Doritos.  Well played, Mr. Snowden. And “Jumps” showed the inept state of the Russian space program when he out-jumped a Soyuz spacecraft just after launch.

To combat the breech of security, the United States Army adopted the policy of using pointy-toothed animals in combat. Below we see Captain Aurelius “Snaps” McFarful in rehearsal for spring commencement at West Point, New York. A 2013 Hungadunga to those involved in breathing life into the Cold War. 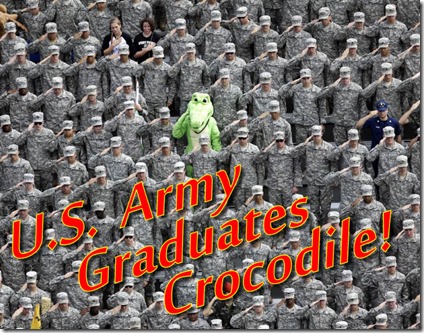 Earlier this year, the clowns in the government decided to take an extended winter break, shutting down the government, and costing the American taxpayer billions of dollars in lost late night monologue jokes.

The good news was that hardly anyone noticed their absence (except for the custodial staff).   The bad news was that they came back to “work,” if you can call it that.

This “empty seat policy” helped create in-roads for lots of others who wanted to give politics a shot. Most notably was Stanley the Squirrel (below, left) who ran for – and won – election as the mayor of Pasadena, California, using the catchy slogan “Nuts to You!” which voiced the frustration of the voter.

Unfortunately, Stanley’s stint as mayor was cut short by the chipmunk lobby (below, right) who accused him of unfair labor practices and skimming pistachios off of government contracted housing projects. He was impeached after three short months in office in which Pasadena saw a decrease in violent crime, and an increase in parks.

A 2013 Hungadunga to the government! 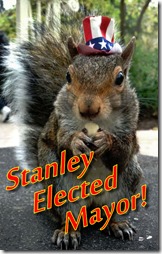 2013 saw many amazing happenings worldwide, some of which can only be classified as miracles of nature.

In Venice, Italy, (above left) tourists were amazed this past summer as the entire city was without gravity for two full months. Visitors to the scenic town loved it, as they no longer had tired feet from walking from museum to museum. Instead they gently floated about. Gondoliers, however, were not as happy, as most of their Gondolas drifted off into space and collided with Soyuz space crafts piloted by frogs.

In Florida, the barber shortage was solved by using trained chimpanzees to cut hair. Above right we see Bobo “Snips” Brandolini in his new shop. The proud owner of a four-chair monkey barber establishment, Bobo’s only complaint is that he is tired or receiving bananas for tips, as there are only so many one can eat in a day.

A 2013 Hungadunga to anything freaky. (Relax, we’re almost done).

People in the News

There were a lot of people doing things in 2013, and since most of it was bad, it was hard to find anyone who deserved an award.  But since I only have a few minutes to get this done, I will throw a dart at my computer and see where it sticks.

We got a new pope in 2013!  Did you hear about it?  He seems like a good one.  Here’s the scoop. Pope Benedict got tired of wearing white clothes so he decided to retire. At first, people at the Vatican didn’t know if this was allowed, since most popes died in office. But he assured them that it was, and they didn’t have to kill him (at least not before his trip to the French Riviera). A great big party was held and the old pope was given some nice parting gifts (below).

Then, Pope Francis (don’t call him Frank – he hates that) took over, after another party. The people took to him right away because he seemed like a real down-to-earth kind of guy. Below we can see him making a pizza in St. Peter’s Square during the Mozzarella Festival on March 19th, and taking some selfies at the Video Music Awards.

Wait, there’s more. 2013 also saw the birth of a future king! Here is a photo of the new Royal Family. Astute readers will note the Queen’s blue hat in the lower right as she tried to photo-bomb the picture and had to be restrained by guards.

Don’t shoot the messenger! Good or bad, love her or hate her, the 2013 Hungadunga of the year goes to Miley Cyrus as the most talked-about person of the year.

Miley Cyrus proved a lot of things to a lot of people in 2013.  Number one: she verified my prediction that singers would soon be getting naked in order to get ahead. Number two: she proved that talent alone is not enough anymore.  You need to generate attention to generate sales.  And number three: you don’t need a fancy degree from Harvard Business School to get ahead.

As I said before, love her or hate her, Miley Cyrus did an amazing job of cashing in on all these trends.  The question that remains is if she can hold onto that attention and have a fruitful career without imploding.  Only time will tell. 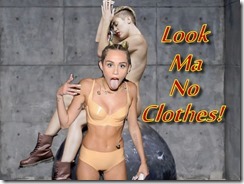 Okay, now I am done.  There you have it, the 2013 Hungadunga Awards.  I could have written a lot more, but by the time I was done it would already be New Year’s Eve of 2014, so this will have to do. I hope you had some fun.