Whatever Happened to Cooties?

Now I wouldn’t consider myself a “germaphobe,” a “hypochondriac” or a “crazy person,” even though I have  been called such things over the course of my lifetime. But I will admit this: I am not a big fan of germs.

Oh, I realize that germs play an important role here on good old planet Earth.  Germs keep us healthy.  If you don’t believe me, just look at what happened to the Martians when they tried to conquer us in “The War of the Worlds.” End of discussion.

Still, if someone sneezes all over the chips section of my local supermarket, I will hold off buying my regular bag of Fritos  until the next week.  I try not to think about what happens in the chip aisle while I am not there. There’s no way I can monitor it at this point, so I just live dangerously.  Call me a daredevil.

Just the other day, I watched a man sneeze right before he handed his money to the cashier.  I immediately cringed, knowing that she would next be handling my food. I was very careful to try and not touch anything the man had touched, I didn’t touch my face either, and when I got home I immediately washed my hands.  I knew this was the right procedure, but still it got me to wondering: are we becoming paranoid about germs?

What has changed over time?  Was our attitude always like this? I thought back to my childhood.  I wasn’t worried about germs back then.  That was my mother’s job.  The only germs I had to worry about were cooties.

Somehow, someone somewhere taught us that the members of the opposite sex were indeed infected with an insidious disease such that if we ever came in contact with them, we were doomed.  In looking back, I have a hunch this was designed to keep the sexes apart – sort of an elementary school precursor to birth control. Unfortunately, parents had no control over hormones, so, cooties or not, right around age 13 you felt your immune system kick in (I think that’s what that was), and you felt impervious to germs.

Prior to this newly-discovered health, parents kept us occupied with the oddly-appealing game (left) where players rolled the dice for a chance to assemble a bug. I don’t remember what you got when you won the game, probably a can of bug spray or something similar.  We were really too young to care, until those pesky hormones took over, telling us that there were better things to play with than plastic.

In general, everyone over a certain age knew that there was no such thing as cooties, even if an elaborate cootie awareness system was set in place. For once a person was labeled as having cooties, they were a social pariah. This was not a good thing in junior high school, where you were busy figuring out which side to choose when nervously going to a dance.  If you were assigned to the cootie section, you were doomed. 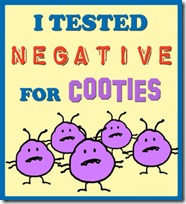 Wait, It Gets Worse

Unfortunately (for you) I did some research and found that despite being known as a “fictional childhood game” (see Wikipedia), cooties indeed have a base in fact, having been named for the bug (lice) that World War I soldiers carried around with them.

Getting Grossed Out Yet?

The name itself is of Austronesian origin,  meaning a parasitic biting insect.  Still feel like playing that game now? I don’t know about you, but I could use a 3-hour shower.

Lucky for you I have to go cook dinner now or else I would present more of what I discovered in my research. 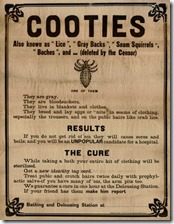 The image on the left is of a poster informing people how to spot and cure cooties, and the one on the right is of an insect believed to be a potato bug. (Great, now I can’t eat potatoes anymore either).

For the sake of brevity (and more so because I don’t want to keep losing followers), I will leave you with this thought: does it seem to you that life in the past was so horrifying that they had to make up games and nursery rhymes just so the children wouldn’t be scared? (Ex:”Good night, sleep tight, don’t let the bed bugs bite.”) I guess when you think of it, we must be healthier today – at least it seems that way when we really look at the facts.

So, then, why are we so paranoid about germs? Okay, we don’t have to go crazy and not clean ourselves or expose ourselves to bad things, but do we really need to disinfect everything with which we come in touch?  My guess is:NO.

Please excuse me now.  I am going to my local supermarket and put my hands right on the shopping cart and then touch my face.  Today I will live dangerously!