A Cry for Peace: What Did We Do Wrong? 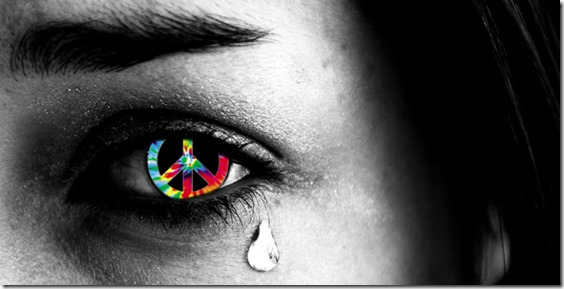 Laughter is one of the great joys of life. But it’s hard to laugh when so many people are suffering. The world cannot exist solely on jokes. I do not feel like being funny today.

A person is molded by their experiences, by their family and friends and upbringing. I also believe that the culture of the times shapes us. Although my birth coincided with the birth of Rock and Roll, something for which I am forever grateful, I would have to say that the 60’s was the decade that affected my personality the most.

The 60’s was a turbulent, violent time. The Middle East was a hotbed of conflict; and wars could be found at many places across the globe. The Cold War was at its apex, nearly brining up to the brink of nuclear conflict. And people fought for equal rights, decency and fairness. Does this sound familiar?

I cannot turn on the television set without shedding a tear every time I watch the news today. The Middle East still smolders with hatred and fighting. Blood is being shed on soil, both foreign and domestic. And the Cold War is dangerously icing up once again.

The miraculous thing about the 60’s was that this violent time spawned the peace movement. That movement took hold in our young people and spread.  It seemed to be everywhere: in the movies, in the music and in our collective consciousness. But where is it now?  What changed, and what did we do wrong? I would have thought that the “peace generation” would have raised an even more peaceful one; one that did not have to fight for equality or a just world. I thought that by now we would have achieved this, but clearly we have not.

What has changed? Information.  We are bombarded by every negative event, picture and thought that happens worldwide. It is “the nature of the game.” It sells newspapers, keeps us glued to our screens, and keep the fear-mongering politicians in office. The world as a whole may be a safer, more peaceful place than it was, but we would never know it by the type on information that flows.

So, what did we do wrong? Nothing. One can never be wrong when trying to do what is right.  The ONLY thing we can do wrong is to give up, to stop trying to achieve peace all over the planet. We may never get there: peace may be an impossibility, but we must never give up. For if we do, that is the time to hang our heads in shame.