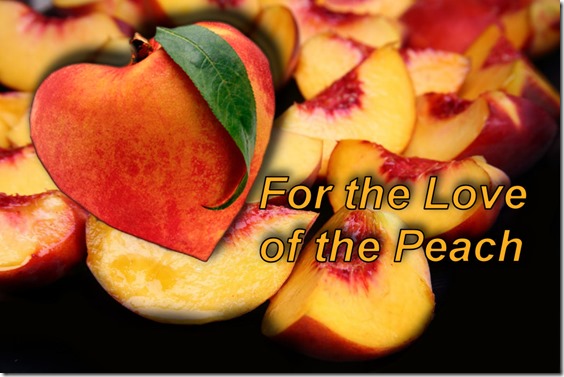 Someone once said: “When you got nothin’, you got nothin’ to lose.” Someone also said “Finders keepers, losers weepers.” Yet another someone said, “Be Bop a Lula, she’s my baby.” What do these sentences have to do with the price of gas in Colorado?  Nothing. Still, I would like to know who these people are; and more importantly, why they never stop talking. One more someone asked me why I never talk.  You are soon to find out because, when I talk, bad things come out.  Thus, the blogger was born.

In case you missed it, August was National Peach Month.  (I know: crazy, right?)  I missed it too, and I am forlorn.  Yesterday I was eightlorn, but we mowed the lorn and cut it in half. So, out of sense of guilt and the need to fill  a few paragraphs, I thought that today I would talk about: the peach.

Consider, if you will, the peach.  If you won’t consider it, then just move on.  Once you are done, please let me know, as I have a pot of tea on the stove and I would like to have some.  I will be back in a few minutes.

By this time, some of you are probably wondering if I am making this up as I go along.  The answer is a resounding “Yes!.” (You would think that you had figured out that secret about my blog by now.) Since I have now been discovered as a fraud, I had better write something real, or they will take away my license. Research, here I come. 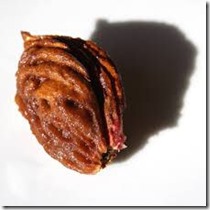 The peach dates back to ancient Roman times, not to be confused with the date which peaches back even further (or farther, as the case may be.) In approximately 1300 B.C. (before choking) Emperor Peachus Pittus, a part-time horticulturalist and inventor of the toga button (before that, they had to hold up their clothes with one hand and never got anything done) bred the fruit by cross-pollinating the mango with the igneous rock. The result was a succulent fruit with a stone inside that could crack even the strongest teeth when bitten into. Peachus, also known as “Zippy” to his friends had three sons: Louie, Dewey and Braddus Pittus, who later became famous for his dalliance with Angel hair pasta. (Stay with me.  I am losing it.)

Asian cultures hold the peach with special reverence.  That is because it is very soggy and will rot faster than just about anything. If you have ever bitten into one that is over a week old, you know what I mean. 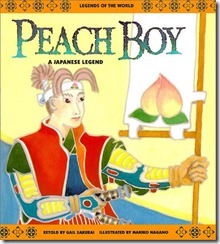 There is an old Japanese legend about a boy who floated to Earth inside a giant peach and was discovered when his “parents” tried to open it.  He was known as Peach Boy (Momotaro), and can be found in many illustrated books. Momotaro grew up to become a fine warrior and did battle with demons, just like the rest of us.Look for his further exploits in graphic novels at a comic book store near you. Peach Boy should NOT be confused with his sister, Peach Girl (Momo Adachi) the star of a Manga (illustrated cartoon style) High School drama that deals with the love affairs of overly-inked cartoon teenagers. In one episode, Momo Adachi develops a crush for Toji, an introverted baseball player whose dream is to play for the Yankees and pinch hit for Ichiro Suzuki.

West is the Best

Western Culture has also accepted the peach into its embrace. Most notably is in the movie “James and the Giant Peach,” and in one of the finest Southern-Rock Albums of all time “Eat A Peach” by The Allman Brothers.

And that brings me to the best thing about peaches (because all this thinking has made me hungry) – FOOD! Face it, no matter how you slice it, peaches are one of the best-tasting fruits in the tri-state area.  If you live in a place where there are more states, you will just have to trust me on this. My favorite ways of eating a peach are in peach pie and peach cobbler (see below: CAUTION: may cause drooling). 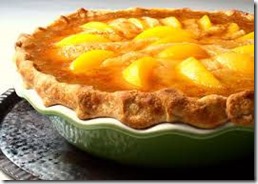 Readers will be careful not to confuse a peach cobbler (above right) with a shoe cobbler (below left), even though peach shoes were once the rage in 1920’s Paris. Also below (right) is Delbert Schnuck, who has made it his life’s ambition to keep alive the lost art of making shoes out of fruit. 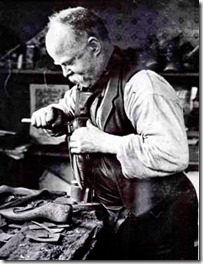 By now it is clear that I have completely run out of things to say. Therefore I had better cease and desist or run the risk of BLOGTINY (Blog Mutiny). If you would like to check my facts, go ahead. Seriously, I didn’t think that anyone had that much spare time on their hands except me.

If you would like to do some research about peaches on your own, just go down to your local market and ask the produce person where the P section is,  The results might be interesting.